On January 31, 2018, Oscar was officially adopted by Shawn & Megan. At the courthouse was the same judge that completed Violet’s adoption a year earlier. This time the judge gave Oscar a stuffed monkey for a present for him to remember his adoption day. He did the same for Violet a year earlier, giving her an elephant, which she brought with her to her little brother’s adoption. Abby, Aiden & I attended the adoption (Melissa was in school). After the adoption, the kids went to Shawn and Megan’s for the adoption party and I went back to work. I picked them up at the end of the day.

Oscar dressed up for his big day

Aiden, Shawn and Megan looking on as The Judge gives Oscar his gift, a stuffed monkey 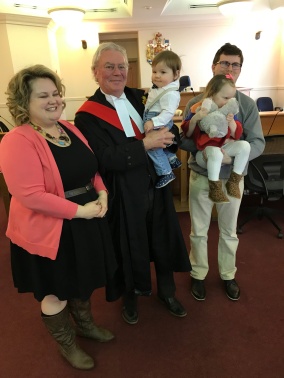 Megan, Shawn, Violet and Oscar with the same Judge that finalized Violet’s adoption