On Saturday morning, I packed up the van and headed for Peterborough, but not before I emptied the kids rooms and put all their stuff in the Toy Room because while I was away, we had someone in to paint the kids rooms blue and pink. 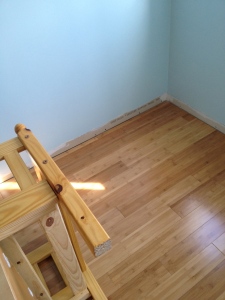 Also, while I was away the contractors finished our new deck in the backyard. 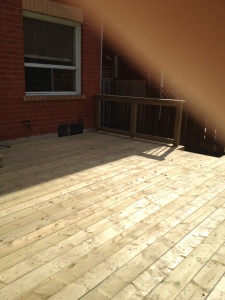 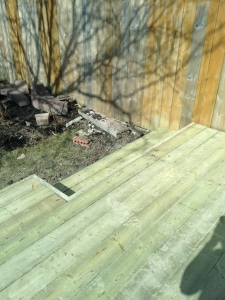 On our way to Peterborough, we stopped off at Julie & Peter’s for a short visit. The kids really enjoyed playing in Julie’s basement. Aiden particularly enjoyed reorganizing their playing cards. While at Julie’s we had a lovely tasting Broccoli Soup. The soup had a nice kick to it so Abby and Aiden each only took a few bites before they said that it was too spicy to eat. After we left Bethany, we met Mom & Dad for church @ St. Peter’s and then went home and had a lovely pulled pork dinner.

On Sunday I got to sleep in (thanks Mom  & Dad). After I got up and had breakfast, I got ready to take Abby to Mom & Dad Miller’s for a sleepover while I left Aiden at Mom & Dad’s. I went to Peter and Julie’s for the night.

I started my visit at Peter & Julie’s by locking my keys in the Van. Since I was at my destination, I simply called CAA and went and sat on the deck and visited with Peter & julie while I waited for CAA to come. For supper I had a fall-offothe bone ribs with rice and grilled veggies. We followed that up with a few drinks and a game of cribbage where Peter A came in last just behind me and 10 points back of Julie. I think maybe Peter A was distracted by the music from the LP he had put on. It was called “The Devils Anvil: Hard Rock from the Middle East.” It was an album that Peter and Brock had rescued years earlier from a trip to the dump. It actually wasn’t that bad.

Earlier in the evening, I introduced Peter the Scottish Comedy “Still Life”, but at the end of the night Peter showed me a movie called The Dark Crystal by “Jim Henson”, weirdest movie I ever saw. I didn’t even get a chance to finish it because I “fell asleep.” That definitely topped the last time I was at the Allison’s when Peter introduced me to 2001: A Space Odyssey. I will definitely finish it when I go back home.

The Next morning (Monday) Peter & Julie took me out for breakfast at Aunt Dees in downtown Bethany. After breakfast I headed back to Douro, but not before stopping to buy the Allison’s a new external hard drive because their’s got accidentally knocked off the table and no longer worked.

After I got back to Douro, I picked up Aiden & we went to Lakefield to visit Mom & Dad Miller. When we got there Abby was just waking up from a short afternoon nap on Grandma’s bed. 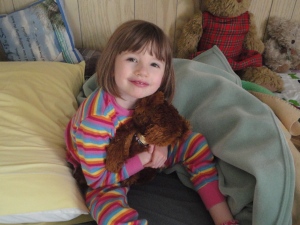 While there we visited and talked about Abby’s sleepover and they told me how good her manners were, which made me so proud. The kids happily played with the toys at Grandmas and Aiden showed off his plumbers crack.

We then ordered pizza from the the new Greek Restaurant and had dinner. The pizza was really good and everyone ate it up except for Aiden. During the discussion over why he was not eating it, Aiden informed me that Momma told him that she would let him be the boss of their house when he is there. It was hilarious the way he annunciated it.  After supper we got the kids in their PJs and headed on home where the kids went to bed and Mom, Dad and myself sat down to watch “Little Fockers”. It was hilarious. Not as good as the second one, but still really funny.

On Tuesday I got to sleep in again (thanks Mom & Dad). After I got up, I took Mom & Dad out for lunch to the Lakefield Restaurant. At the restaurant, the kids behaved great and had excellent table manners. Aiden paid special attention to making sure that some of the crayons that had fallen on the ground under the table got picked up.

After lunch we went to the Riverview Park and Zoo in Peterborough. It was 16 degrees and sunny all afternoon so we figured the kids would enjoy spending the time outside. They played in the playground equipment most of the time, but they also ran around to see some of the animals. They particularly enjoyed the Otter display because the otter was very active and swam by the window where the kids were watching numerous times. The thing that really impressed me though was that when they got to the meerkat exhibit, Aiden piped right up before anyone had identified the animal, and said “Dad, Dad there’s the meerkat.” I guess those animal videos that he watches on his leapster explorer are paying off. 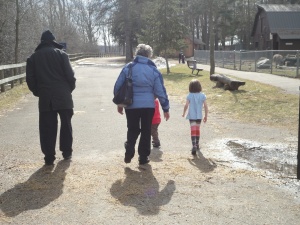 After that we headed down to Tim Hortons where Mama treated us to a late afternoon snack. The highlight was winning the free coffee on the roll u p the rim to win contest. I will use that when I go back to work. And that concluded Tuesday in Peterborough.

One thought on “Trip to Peterborough over the March Break”